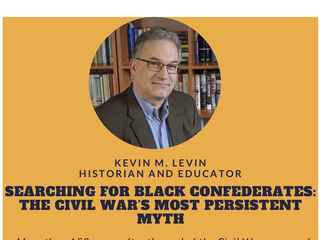 More than 150 years after the end of the Civil War, scores of websites articles, and commemorative organizations repeat claims that between 500 and 100,000 free and enslaved African Americans fought willingly as soldiers in the Confederate army. Such claims would have shocked anyone who served in the army during the war itself. In this talk, Kevin M. Levin will explore the origins of this myth and discuss its persistence and impact on public discourse today.
Kevin M. Levin is an award-winning educator and historian based in Boston, Massachusetts. He has written extensively about the American Civil War and has spoken across the country on the current controversy surrounding Confederate monuments. Levin is the author of Remembering The Battle of the Crater: War as Murder and editor of Interpreting the Civil War at Museums and Historic Sites.
Sponsored by the Department of History; the Public Humanities Minor; the Orser Center at the UMBC Department of American Studies; the Dresher Center for the Humanities; and the Center for Social Science Scholarship